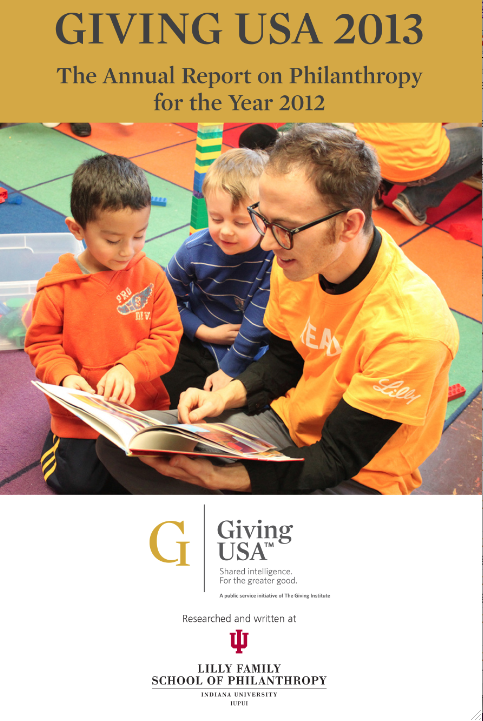 One of the things I have valued over my 35 year career in fundraising has been the critical insights on philanthropy that Giving USA provides.  For 57 years, Giving USA has been the gold standard of reports providing an annual, in-depth accounting of charitable giving in the United States.

That’s why I’m excited to say that Giving USA has just released its 2013 report which provides in-depth data on charitable giving for the year 2012.

One of the key takeaways in this year’s report (that may encourage you as you have struggled to raise money) is that charitable giving in 2012 displayed sluggish growth, mirroring the slowly recovering economy.

One of the most powerful parts of the report is the longitudinal data it provides on giving over the past six decades.  This year’s report states that estimated giving in the U.S. in 2012 increased to $316 billion, which is a 3.5 percent increase over 2011, 1.5 percent adjusted for inflation.

While this is encouraging, economists with the School of Philanthropy at Indiana University estimate that at this pace, it will take another five years for giving to reach 2007 levels, when adjusted for inflation.

For CLA members, of particular note is the section on giving to religion which indicates that giving to this sector actually declined in 2012, while giving to the other seven sectors increased.  Religion has historically been the greatest recipient of charitable donations, trending at about one-third of all contributions.  In 2012, it represented 32 percent of overall giving, which is down from 33 percent in 2011.

There are a number of dynamic issues impacting giving to religion today, which Giving USA 2013 identifies and delves into, providing valuable insights for Christian fundraisers and leaders.  For CLA members, this section is worth the price of the entire report.

This year – for the first time in its history – Giving USA is bundling the printed report with an electronic version of the report as well as providing PowerPoint slides of key charts, which you can use for presentations.  In addition, you will receive the special Highlights report… all for only $89.95!

And here’s the some great news! CLA members and all those in the CLA social media community can take advantage of this special Giving USA offer:

Giving USA Report for 2013:The Annual Report on Philanthropy for the Year 2012

Every Christian nonprofit organization should purchase a copy of this report in order to develop informed strategies and to help executive and board leadership better understand the current fundraising environment and underlying trends that impact the financial support of their organization.

I encourage you to take advantage of this offer and order your copy today – HERE.

Christian Leadership Alliance exists to equip and unite leaders to transform the world for Christ. Join the alliance and connect with high-impact Christian leaders who are think higher for greater Kingdom gain.