The Decision Maker: An Interview with Dennis Bakke 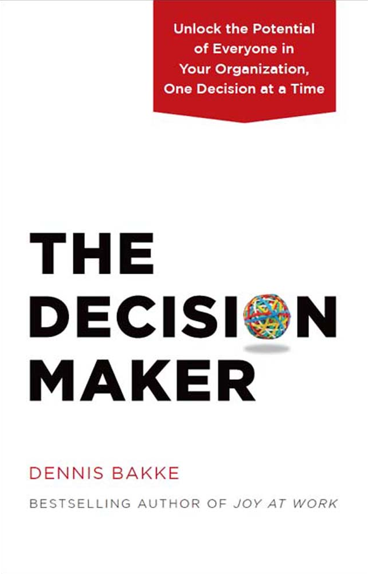 Dennis Bakke is a revolutionary innovator, successful entrepreneur, and dedicated Christian leader. Outcomes editor W. Scott Brown interviewed Bakke on his newest book The Decision Maker: Unlock the potential of everyone in your organization one decision at a time (Pear Press, 2013). This book offers a fictional account of what it looks like when one applies the people empowering principles that Bakke outlined in his bestseller Joy at Work: A Revolutionary Approach to Fun on the Job (PVG, 2005).

WSB: How do you hope The Decision Maker impacts organizational leaders?

DB: My whole journey has been to try to get leaders to recognize that people are people, not machines. God made each of us uniquely with an ability to think, to reason, and make decisions. It is those things that are important. The essence of a human being is our ability to think and reason, and to hold ourselves accountable. We’re created in the image of God. And yet we treat people as if they’re either machines or subhuman. In the workplace, people are often treated like mere producers. Obviously we are gifted in producing. But it’s not the essence of who we are. We have been given ability to create, to make decisions, and to hold ourselves accountable for those decisions.

WSB: What type of paradigm shift is required to apply the principles from The Decision Maker?

DB: The big one is giving decision power to others. As bosses, we’re accustomed to making decisions, and some of us think we’re God’s gift to decision-making. That shift is impossible for many to overcome. The essence of being human is our ability to think, reason, and make decisions. So if you’re a boss and you’ve been doing that for a while, and you’re good at it, why in the world do you want to give it up?

There’s nothing wrong with getting paid more to be a leader. But what I try to convince people of is that leaders are not the decision makers. Leaders are the servants. It’s biblical. A boss shouldn’t make all the decisions. They should lift others up so that they can make good decisions, advising them, loving them as a servant leader.

At work, all big decisions are made by the bosses. That’s not the way God intended it. People with biblical knowledge should understand this very well. But it’s extremely hard to do. For Christians it should be second nature. Unfortunately it’s not.

WSB: So, how are Christian leaders in releasing decision-making power to employees?

DB: Christian leaders, including those working in Christian organizations, have not been very responsive to this approach. Now, I think they’ve changed a little bit over time. But for the most part, I think they’re behind the best companies.

It should be really easy for Christians to get this. But Christian businesspeople and a lot of pastors who lead big churches (actually maybe it’s even worse in small churches) operate more like a business executive than they do like Jesus.

Just look at Jesus. He didn’t make all the decisions, and yet — unbelievable effectiveness. He lifted people up and had them make the decisions. So for believers there is no excuse. Follow Christ. He served the disciples. He lifted everybody up. And that’s where I got most of this, by studying how God created the world, and realizing this is the way God intended it to be: that we were all called to be decision makers.

WSB: The ideas in your books would radically change the way that organizations lead their people, right?

DB: No question about it. They’re about radically different leadership. We hear about servant leadership, but nobody really knows what it means. The servant part is giving up your own power, or better put, not using your power. It’s what parents do all the time. Really good parents gradually quit making decisions for their kids. They walk alongside them; become advisers. It’s a gradual process.

The object is to allow people to be the best they can be, not to create the highest productivity. They will be very productive, but that’s not the focus. Once it’s about productivity, it becomes a technique and everybody says, “Oh, you’re just letting me make the decisions because you want to make more money.” So what happens when there’s a turndown in the economy? You clamp down. It gives a boss a good excuse to say, “Okay, I’m back in charge.”

This change in decision-making is very difficult. It’s easy to make excuses as to why you shouldn’t do it, but they’re not relevant and they certainly aren’t biblical.

WSB: What do you say to those who ask whether all employees are equipped to make those big decisions at work?

DB: That’s a very good question. I’ve gotten it a lot. But there’s one key rule in the decision process: you’ve got to get advice. You must educate yourself. Before you make that decision you need to get advice from people who’ve been through this before. From my perspective, your boss is a mandatory advisor.

For me, if you don’t get advice you’re fired; I don’t care how good the decision was. Well, maybe you get one break. But I had to make it very strong because in the early days we had a lot of go-getters who ran off and made decisions without ever talking to anyone. You must get educated on every issue you deal with. And so in the book we discuss making sure you get advice.

The second thing is that the boss always has the opportunity to overturn an employee’s decision — for example if you think it’s going to ruin the whole company. But you’d better be careful using that power, because once you do, you’ve probably lost your effectiveness. I don’t remember anyone having to overturn a decision at AES or anywhere else. But you had that option. And so people paid attention, and were careful about getting advice before they went forward.

WSB: Any final encouragements for leaders?

DB: Even at home, think about how to be a servant — how to quit making decisions and be more of an adviser for children, for spouses. Let’s live in a way that God intended, for the powerful to be servants. The more money or responsibility you have, the more you should exemplify humility and servant hood.

This interview is an excerpt from the 2013 Summer edition of Outomes Magazine.