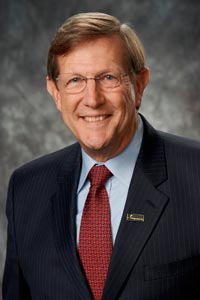 Stafford, an internationally recognized advocate for children in poverty, is author of Too Small to Ignore and Just a Minute. He has announced his upcoming retirement after 35 years of service at Compassion, including the past 19 as president. He joined the staff of Compassion in 1977 and has served as president since 1993. At the time of this Outcomes interview, Compassion was in the process of selecting Stafford’s successor as president.

Founded in 1952, Compassion International is one of the world’s largest Christian child development agencies, partnering with more than 60 denominations and thousands of local churches to serve more than one million children in 26 countries  (Compassion.com).

Could you reflect a bit on your leadership as Compassion’s president?

My earliest role at Compassion was as our representative in Haiti, probably the poorest country in our hemisphere. It allowed me to see what poverty does to children. I saw the strategic importance of the church. I felt the spiritual battle over each child. I saw the hope that a sponsor from across the world could bring into a little Haitian slum by letters and words of encouragement. In retrospect, that experience started me at the “top” of the organization.

I held many other positions before becoming president in 1993. I was associate director of this and assistant manager of that, occupying little cubicles along the way. I didn’t seek leadership. I fought for organizational excellence and to my surprise leadership found me. If it had required political savvy or manipulating relationships, I doubt I ever would have become president.

My path to becoming Compassion’s president actually leads back to the Ivory Coast where I grew up in a little village, the son of missionary parents. I was raised by a whole village of poverty-stricken — but remarkably courageous, loving, and joyful — people. They shaped my heart, values, and worldview. I often say that everything I needed to know to lead this worldwide ministry I learned from the poor in that little village in Africa.

I have led Compassion with vision, passion, and energy because of God’s calling on my life. It’s the sweet spot of what God created me to do. If Compassion hadn’t existed when I came here 35 years ago I would have needed to start it because it is so aligns with my life experience and understanding of God and his kingdom priorities. My passion and calling is to minister to the poor, to speak for those who can’t speak for themselves, to be a champion for children, and servant to the church. Compassion brought all that together.

That God would entrust to me leadership of Compassion is humbling. I don’t take it for granted. Even after 19 years as president, I often feel like a little boy sitting in his daddy’s pickup truck waiting for someone to poke his head in the door and say, “Hey, what are you doing in there?” I have been successful because of God’s calling, faithfulness, and grace.

How do you equip Compassion’s next leader to serve well?

My job is to commit to the success of my successor. I have lived with succession on my mind for the last five  to six years or more, including mentoring candidates who might succeed me. From the minute our Board selects my successor, I will do anything necessary to help them to succeed.

For Compassion, my leadership chapter has been one of growth, respect, and influence in the broader kingdom of God. The Chronicle of Philanthropy came out with a report just last October of the 100 largest nonprofit organizations in America. They pointed out that Compassion made that list in 2004 at number 86, and today just eight years later, we’re at number 23. That kind of growth makes an organization visible. We have grown to 1.4 million sponsored children. The budget has grown to more than $600 million. That’s an exciting chapter, but it’s only one chapter.

A leader who does not replace himself with someone better suited for the next chapter has not properly served the organization. You don’t have to look very far to see how succession poorly done derails organizations. Succession, even done well, dominates the psyche of an organization for as long as a decade.

Compassion had only done this three times before I came along.

The Article was featured in Outcomes Magazine Spring 2013. Since this interview was published, Compassion International has announced their new president, Santiago (Jim) Mellado.

If you haven’t registered for the CLA National Conference in Anaheim – there’s still time! Wess Stafford will be the keynote speaker on Tuesday evening, April 30. Come and join thousands of leaders called to transform the world for Christ.