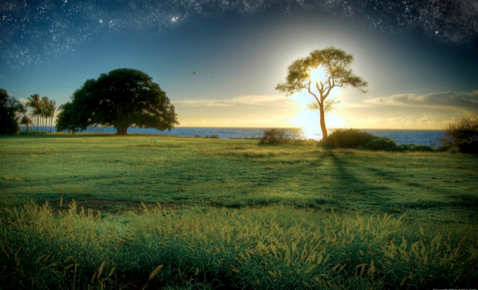 I was recently remembering the environmental and anti-littering commercials that were on television during my childhood.  Maybe you remember them too.  One ad campaign featured a Native American seated on a horse, a tear of sadness rolling down his cheek, as he gazed upon the litter piled up in the valley below him.  These commercials profoundly affected me, and certainly my generation as a whole.  It became shameful to litter.  I grew up in a town with a small, lazy river, which I would raft down during the hot summer months.  I recall thinking the Native American from the commercials may be watching me from the banks of the river.  This thought was an incredible deterrent to littering.  As an adult I sense the power of the Creator watching as His creation is misused and abused.

Isaiah chapter 40 perfectly illustrates humanity standing before a magnificent and holy God.  God proclaims His greatness and the insignificance of mankind, as well as all of creation, in the face of His power, authority, and strength.  Isaiah writes about smoothed deserts, valleys lifted up, flattened mountains, and valleys formed from rugged earth.  Created humanity cannot stand against the Creator any more than grass or flowers.  God nurtures, sustains, and protects His creation, as seen in His desire to shepherd and protect His people.  Beginning in verse 12 of chapter 40, Isaiah records God’s rebuke of those who are haughty enough to compare themselves with His authority.

Isaiah 40:22 begins a beautiful, undeniable, description of God’s power over His creation.  God sits above His creation, viewing humanity as grasshoppers.  God grants all authority at His pleasure, with abundance or scarcity meted out for His purposes.  Scripture, as demonstrated by Isaiah 40, unmistakably recognizes God setting nature on its course under His direction and by “His might and the strength of His power” (Isa 40:26).

Created humanity responds as grateful managers of what clearly belongs to God, as seen in passages such as Matthew 25:14-30.  The Parable of the Talents distinctly teaches the principle of stewardship, and the inescapable fact nothing belongs to a person that has not been entrusted to him by the rightful owner.  One must understand the incredible responsibility God places on His stewards to return His possessions when required, and with increase, if possible.

The book of Genesis establishes people as the cultivators, managers, and caretakers of God’s creation; however we as Christians habitually abdicate that role – we often resemble wolves rather than caretakers.  As steward leaders we must empower people at every level of our organizations to initiate and implement efforts to cultivate God’s creation.

Will you lead your people to care for creation?

Howard Rich is the President of Steward Development Group, a leadership training and coaching firm established to help business professionals discover the freedom of generosity and stewardship.

Give the gift of learning. Donate to the CLA Future Leaders Fund and provide scholarships for CLA membership,  registration for the CLA National Conference or enrollment in the CLA Online Academy. Your gift helps newer and younger leaders become effective steward leaders and Kingdom sowers.