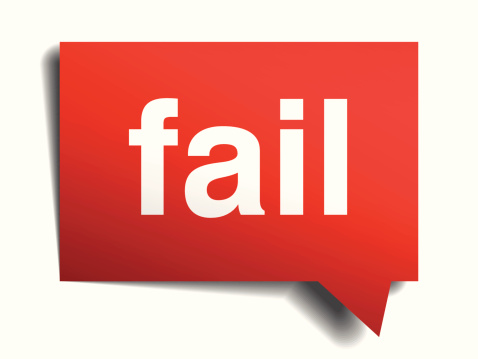 Leadership development tends to focus on increases in effectiveness, doing right things, forming healthy habits, and building success.  On our road to successful and effective leadership we learn practices and techniques intended to help us make good decisions, lead ourselves well, and propel our organizations and people to win.  But, what do I do if I fail?

As a Christian in a leadership position, I fail.  Every day I fail in some way; usually in ways that most of us would consider small.  However, there are times when I have an epic failure.  How should I respond when I fail as Christ’s steward?

King David is referred to as a man after God’s own heart (1 Samuel 13:14; Acts 13:22), yet he failed often, and in some big ways.  His pride definitely got the better of him when he demanded Joab take a census of Israel (1 Chronicles 21; 2 Samuel 24).  Joab protested and made it clear David was doing wrong, but the king was stubborn, refused to listen, and insisted Joab obey his command to number the fighting men of Israel.

However, when David did come to his senses, he was humbled and repentant.  He realized his folly and that he was looking toward his own means and strength to lead Israel, instead of God’s provision.  David’s response to his disobedience and faulty decision-making was to admit he was wrong, repent, and willingly submit to the consequences.  Further, when the punishment for his sin fell upon all Israel, David pleaded with God to spare the nation; he took personal responsibility, stepped back into his role as caretaker and asked for the punishment to fall on him.

When we make faulty decisions based on arrogance and pride, or just plain stubbornness, we would be wise to learn from King David’s example of repentance.  Admitting failure in our duties as stewards and accepting the consequences is difficult and requires humility, but it sets a healthy, God-honoring tone in our organizations.

Question:  How will you handle your failures as Christ’s representative?

Howard Rich is the President of Steward Development Group, a leadership training and coaching firm established to help business professionals discover the freedom of generosity and stewardship.