Passing the Baton by Wess Stafford 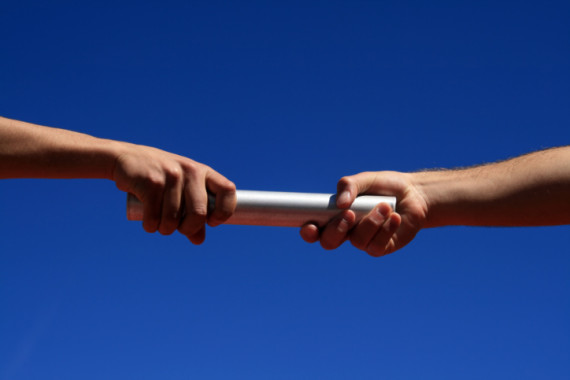 I can’t wait for next year’s Summer Olympic Games in Brazil. I love track and field events, especially the exciting relay races — often won or lost in the split seconds of passing the baton from one runner to the next. Do it with excellence and the whole team prospers. Fumble or drop the baton, and usually it’s impossible to regain a winning momentum. Leadership succession is like that. It is said, “There is no success without succession.”

I have experienced succession twice now — 22 years ago as the incoming president of Compassion International, and again just two years ago as the outgoing president as I stepped into retirement. In both cases the transitions were a God-honoring, uplifting process for the organization. So what have I learned?

Most importantly, choose the right successor! That seems obvious, but if you get this wrong, no amount of process excellence can fix it. So how do you know the right person when you see him or her?

I initiated the succession process by announcing my intention to retire three years in advance. It then didn’t create anxiety to begin asking people, “What should characterize Compassion’s next president?” Being the first question posed after my announcement, and before any candidates had been considered, this enabled clear, open thinking and honest expression.

In closed sessions, I presented a survey to the leadership at the board, executive and international partner levels, asking them to rate the importance of specific qualifications and traits. The results from all three leadership groups were nearly identical. So before we even began the search process, we were able to craft a 20-point document that described what we all agreed we were looking for.

If you fast-forward through the year-long internal and external search, the interview and screening of dozens of candidates, to the final board selection, the wisdom of our having arrived at this initial consensus shines through wonderfully. At the final stage, as our global staff fasted and prayed, the board unanimously chose Santiago “Jimmy” Mellado as Compassion’s next president. And it was the final matching of that preliminary document to Jimmy, point by point, that gave us the blessed confirmation that he embodied virtually everything we had, several years earlier, described as our ideal new CEO — and he was even “more than we asked or imagined” (Eph. 3:20)!

Further affirmation came through discovering how God had worked so incredibly in Jimmy and his wife Leanne’s lives to bring them to Compassion. With absolute assurance that God had led in our succession process, the actual passing of the baton, then, was a joyful, positive experience for the entire worldwide ministry.

Having successfully passed the baton, the spent runner then finds just enough strength to shout to his successor, “Go, go, go!” And in a runner’s mind, the finish line is not the actual tape, but ten yards beyond it, to ensure he keeps giving his all through the finish. Follow-through is crucial.
Our new president’s orientation, training and transition took six months. Midway through that period, I pledged to Jimmy:

1. ?I am completely committed to your success; I want you to thrive at Compassion, and I want Compassion to thrive under your leadership.

2. ?From this point forward, I will not reverse any decision you make.

3. ?I’ve got your back; I will never speak ill of you, and will not allow you to be unfairly criticized.

4. ?I will be transparent and always tell you the truth about anything.

It has been two years since that conversation. Jimmy says this follow-through phase gave him great courage and confidence. He is doing an outstanding job.

There isn’t a one-size-fits-all formula for successful succession, except for, above all else, relying on God to guide. According to several scriptural examples, God cares about leadership transitions and involves himself in them. A well-passed baton honorably caps off the tenure of the departing leader, provides the new leader with a running start in a new chapter of leadership and gives the whole organization the joyful hope and confidence that its best days are yet to come!

All good athletes train hard … for a gold medal that tarnishes and fades. You’re after one that’s gold eternally. I don’t know about you, but I’m running hard for ?the finish line. I’m giving it everything I’ve got. ~ 1 Cor. 9:25–26, MSG

Dr. Wess Stafford, the author of Too Small to Ignore (WaterBrook, 2007) and Just a Minute (Moody Publishers, 2011), serves as president emeritus of Compassion International the world’s leading authority in holistic child development through sponsorship.