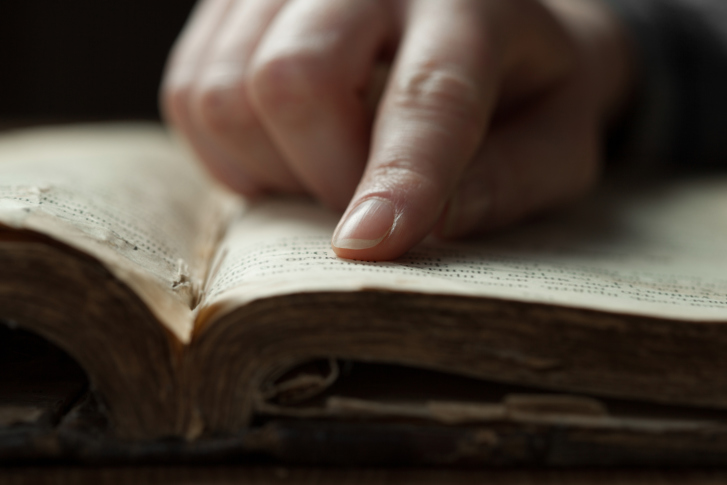 Acts 1:3 tells us Jesus spent 40 days after his death and resurrection with the apostles “speaking of the things concerning the kingdom of God.” Men described in Acts 4:13 as “uneducated and untrained men,” recognized as “having been with Jesus.” Yet on the day of Pentecost, God used the message of one of them, adding 3,000 souls to their number!

These men knew their doctrine. They understood that the death and resurrection of Jesus Christ brought forgiveness of sins. Jesus would return just as he promised and the prophets wrote. Repentance, having a change of mind about Jesus, and believing what God said in his Word was essential for salvation: “words to you by which you will be saved….” (Acts 11:14). They reasoned from the Word. They proclaimed, preached and taught God’s Word.

Because the momentum of the gospel is in its words. According to Romans 1:16, the gospel is “the power of God for salvation to everyone who believes….”

It was by, in and through Christ’s name: “For there is no other name under heaven that has been given among men by which we must be saved” (Acts 4:12b). This is a consistent theme in Acts. “Of Him all the prophets bear witness that through His name everyone who believes in Him receives forgiveness of sins” (Acts 10:43).

This is why Jewish authorities asked Peter and John, “By what power, or in what name, have you done this?” (Acts 4:7b). Jesus is the name which must be proclaimed, understood and believed in (Rom. 10:8–17).

Think about it. Could it be that the gospel lost its momentum in America because our busyness and entanglement in the affairs of this life kept us from his Word, and from a firsthand knowledge that brings confidence and boldness to stand for truth?

Was it that we didn’t really believe what Jesus said: “It is written, ‘Man shall not live on bread alone, but on every word that proceeds out of the mouth of God’” (Matt. 4:4)? Or maybe it was because we thought studying the Bible was for those called to teach and lead us spiritually!

Maybe we didn’t think through that if God gave us 66 books in the Bible, it was because it took 66 to establish us in the whole counsel of God. Or maybe we were unaware that grace and peace are multiplied to us in the knowledge of God and of Jesus our Lord and that by his divine power he has granted to us everything pertaining to life and godliness, as is written in 2 Peter 1:2–3:

Grace and peace be multiplied to you in the knowledge of God and of Jesus our Lord; seeing that His divine power has granted to us everything pertaining to life and godliness, through the true knowledge of Him who called us by His own glory and excellence.

We are to live accordingly!

Be sure to read this series of special posts on the Saturdays leading up to The Outcomes Conference April 4-6, 2017. The theme for conference this year is MOMENTUM.

In case you missed last week’s post – be sure to check it out:  Momentum One: Wisdom.

*All Scripture citations in this article are from the New American Standard Bible (NASB).

Kay Arthur is the co-founder of Precept Ministries. Kay is the teacher and host of Precepts for Life™, a daily television, radio and online program with an audience reach of over 75 million households, broadcasting into more than 30 countries. This post is an excerpt from her article in the 2017 spring Edition of Outcomes magazine.