How Will You Pass the Baton? By Howard Rich 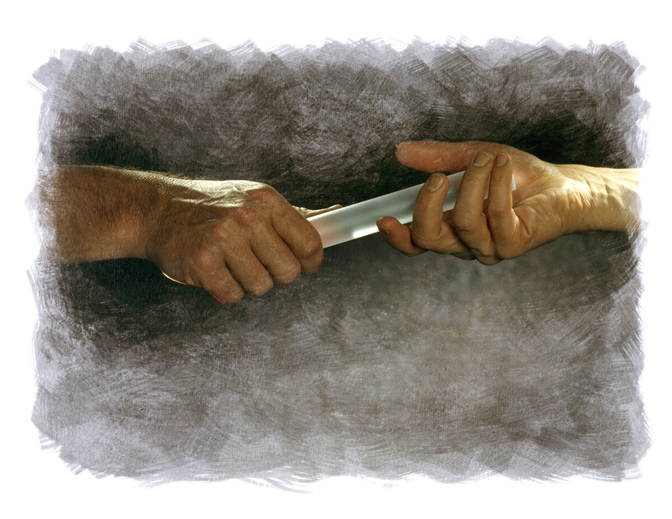 Passing the Baton as a Steward Leader

Those of us with leadership responsibilities often talk about replacing ourselves, empowering others to lead, and passing the leadership baton to the next generation.  Recently, I was challenged to think about whether I had a leadership baton to pass on, and if so, what is that baton.  The metaphor of passing the baton is taken from the team sport of the relay race.  In the relay race, there is a great deal of pressure to pass the baton smoothly and effectively so neither participant stumbles or makes a move that will cause the baton to fall to the ground.  The pass is crucial to winning the race.

As I have contemplated what it means to pass the baton, I have begun to think about what Jesus did as He launched His disciples into the world as stewards of the good news of salvation through Him.  There are two things that intrigue me about the way Jesus passed the responsibility of spreading His gospel.  First, He prayed for them; secondly, He sent them, fully trusting they could pick up the responsibility.

Chapter 17 of the Gospel of John records the prayer of Jesus shortly before His betrayal and subsequent arrest.  In verse 2 and again in verse 6, Jesus acknowledged that the men He had poured His life and teaching into were sent to Him by the Father.  Jesus confirmed the disciples that were given to Him by the Father had received His teachings and had come to understand who He is, embracing the words that He had given them.

Jesus Prays for His Disciples

In verses 9 through 19, Jesus asked certain things from the Father for His disciples, differentiating between those who believed in Him and the rest of the world; the ones who believed in Him were those belonging to the Father, and the Father had given them to Him.  Jesus prayed for those He would be leaving behind, asking the Father to unify the disciples and keep them faithful.  Jesus stated that He kept them safe and guarded them, but now that He was leaving the world, He asked the Father to guard them and give them joy.  Jesus did not ask that they be removed from the world, but that the Father would keep them out of the hand of the “evil one.”  The Lord was also speaking to the Father about launching His disciples into service for the Kingdom.

In verse 18, Jesus transferred His earthly mission to His chosen apostles.  Following His prayer for those closest to Him, Christ raised up to the Father all those who would come to believe in Him because of the future work of the apostles.  Jesus expanded His blessing of unity and sanctification from those with whom He personally walked to all those who would join the Kingdom through the witness of those entrusted with His words.

Jesus assigned His Kingdom expansion into the hands of others, knowing He had educated, equipped, empowered, and possibly most importantly, trusted them.  He did not control them, watch over their shoulders, or dictate their moves; He launched them as His stewards, and he trusted them.

Are you prayerfully passing the baton to those under your care as fully trusted stewards?

Howard Rich is the CFO of Global Disciples.  Howard is a life-long advocate of generous living and desires to see Christians lead from a heart of stewardship and generosity.

Dr. R. Scott Rodin, President, The Steward’s Journey, will be teaching two workshops at The Outcomes Conference 2019. Both focus on how to become a Steward Leader. We highly recommend these two sessions for those who want to go deeper.

This workshop will compare owner-leaders to steward leaders and make the case that steward leaders are uniquely equipped to lead effectively in the challenging environment of Christian ministry, and in the face of an increasingly hostile social culture. Outcomes: 1) Create an assessment of their own leadership style, 2) Discern a process of becoming a more faithful steward leader, and 3) Determine daily actions to take with them for the journey

This workshop will build on Part 1 “Up-Rooted” and present three actions that will help every leader be better equipped to lead effectively; 1) Stepping off the throne of our own kingdom, 2) Developing deeper intimacy with God, and 3) Securing our identity in the One we follow. Outcomes: 1) Embrace three new commitments as steward leaders, 2) Integrate three new disciplines to guide their journey, and 3) Apply a steward leader prayer.