Move Away, Toward, and Beyond By Mark L. Vincent 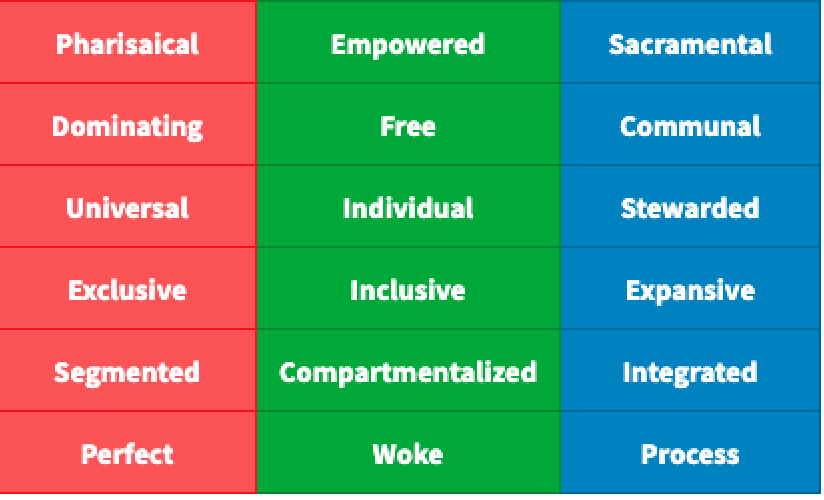 What changes when you move in a different direction?

The way you move could reveal where you stand today. I’ve not put any headers on the three columns, above. There is something in me that resists labels and categories at this cultural moment. They all too easily end up in name-calling. You might take some time to consider how they flow together as well as what questions they spark.

And let’s admit from the beginning that this is simply an imperfect construction, a small attempt to try to move from stuck to an insightful place. This, then, is more soul song than op-ed.  More looking at what we might do as dust settles and as perhaps a more equitable and less prejudiced society breaks out.

Western culture held up a moral code rooted in Judeo-Christianity. Morality did not have to actually be there once the doors were closed and the lights were out, but the Pharisaical  façade shone a light on everyone and judged accordingly. Some people who were shunted aside, judged, and harmed are expressing their anger. Many more are starting to peek their heads out to test if the winds really have changed, meekly stepping into the open air and stretching their limbs and voices in newfound empowerment.

Dominant culture conquered, oppressed, and enslaved. Who can dispute this? More recently conquering shifted to intimidation, oppression was expressed more subtly as repression, and slavery became segregation and incarceration. Some who have so long been dominated are trying to exercise freedom by dominating – or by setting up zones where the dominant culture is not welcome. Many more wonder if they can echo MLK, Jr and thank God Almighty that they are free at last.

The dominant culture seemed to expect that its values should be held to universally, that people should give up who they are and how they experience the world in order to conform to the standard. The individual is on center stage now, shouting loudly and carrying signs. I will define myself, thank you! Many more are not shouting or demonstrating; they are quietly trying to get a handle on who they are while the categories and combinations grow ever more complex and confusing.

The dominant part of society acts in exclusive ways. We are WE. You are OTHER. Protests – whether violent or peaceful – call for society to be more inclusive. Perhaps we can finally make room for everyone like me, however “me” is defined.

This next part is perhaps the most subtle. The dominant culture previously segmented, gerrymandered, divided, and alienated according to ethnicity, religion, gender, and lifestyle. Our current moment of sweeping unrest invites realignment. Everyone can live under the same tent, and – in the compartmentalized lifestyle – rooms of their choosing. Work, family, sex, gender, faith (or a search for one), leisure interests, each has its own community and its own snugly drawn curtains.

The long-dominant theme in society is that faith (return of Jesus) or science (some level of Star Trek human evolution) or a combination of the two would usher in an era of perfect peace and prosperity. Now, the ideal is about being woke, aware that there is no perfection and that there is deeply ingrained injustice and lack of equity.  Many are being awakened by those who claim a high degree of woke-ness.

Rather than debate and fuss over how society is progressing along these rows, I’d rather live in column three. Without that column, we are likely to circle back to the beginning, back to the first column with a whole new set of dominant and dominating forces. The newly empowered already seem to be setting up a new form of Pharisaism, cancelling those who do not recite the litany of proper catch phrases.

Newfound freedom leads to a new dominion if we are not careful, perhaps even a new form of totalitarianism and new laws that deny people from participating in the public square. The individual who shouts the loudest and acquires the most followers may demand universal conformity to their point of view. Their “whatever” could become “whatever I determine.” Inclusion could get twisted into a new form of exclusion of all those who do not agree – or did not agree soon enough. The life compartments that are supposed to be in big tents might become walls along newly defined borders. Woke-ness might write a new definition of what gets construed as perfect, with the inherent Emperor’s new clothes of hypocrisy not allowed to be pointed out.

Rather than choosing between who/what has dominated and who/what no longer will be, I intend to keep pursuing, living, and offering a life that is:

To pull all of this together, a saying that has long enamored me brings this soul-song to a close: I live in the now, not the not yet. But the not yet is in my heart now.

Registration is now officially open for The Outcomes Conference 2021 in Jacksonville, Florida!

REGISTER TODAY AND SAVE!