When Jesus Chooses to Not Play Nice By David Sanford 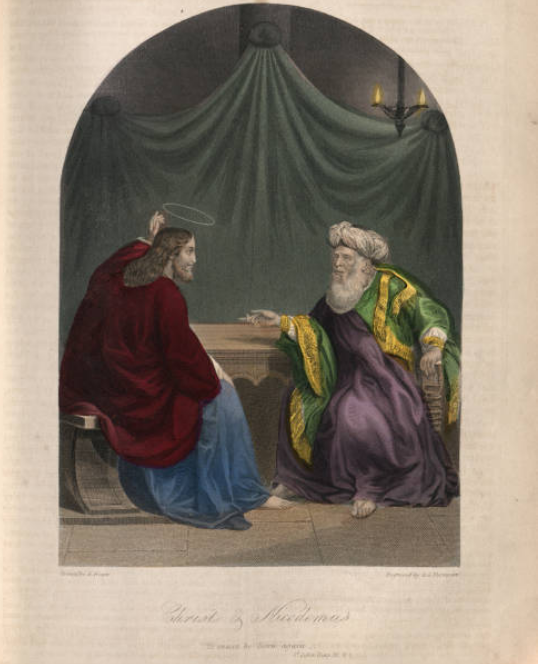 To Jesus, the master conversationalist, relationship and meaning triumph over social norms…every time. He interrupts. He puzzles. He changes subject. He provokes. He monologues. It’s all fair game toward one overriding mission. This is what happens before the Bible’s most famous verse, John 3:16!

Because of the intense hatred of the majority of the ancient Jewish religious elite, any true seeker among them had to talk with Jesus privately, in secret, for fear of swift and terrible retribution. So one night an important and widely respected religious leader, Nicodemus, uses the cover of darkness to visit Jesus.

Let’s use our God-given sanctified imagination as if we were in the home where Jesus is staying and can watch this famous story unfold.

There’s a single sharp knock at the door.

The housemaid, Rachel, answers the door only to freeze, in abject fear, when she sees who it is. Thomas jumps up to see what’s the matter. The one who later told his compatriots, “Let’s go and die too,” stiffens his back.

Thomas steps back as he swings the door open. Now, everyone tenses up. Except Jesus.

Jesus stands up, smiles, walks over, kisses Nicodemus on both cheeks, and asks him to wait a minute while someone fetches a towel and basin of water.

Jesus motions for Nicodemus to take the place where He had been seated. Jesus sits in front of him on the floor. The two men look at each other. And look. And look. Nicodemus takes a deep breath and relaxes his shoulders.

To no avail, Bartholomew tries to do the same.

To Not Play “Nice”

Judas (not Iscariot) leans in to hear what’s said, only to startle when Jesus interrupts the esteemed religious leader.

Jesus smiles as He waves His hand in the air between himself and Nicodemus.

Interrupting? Inexcusable. Waving away his opening remarks? Unheard of.

“Nicodemus, my dear man. There is no need to remind me what miraculous things I’ve been doing. There’s no need to insist I must have come from God. I know full well who I am. And you, you are one of our nation’s greatest religious teachers. You know the Hebrew Scriptures well, yet you want to ask me what they mean?

In particular, you’re puzzled that God promises to one day give His people new hearts. Yes, that day has come, and you must be born again.”

“Born again? Sure, that’s going to happen…just as soon as I figure out how to get back in my dear mother’s womb!”

Rachel cups her mouth. The disciples chuckle. Ouch. Not what I wanted to think about.

Jesus comes right back at him.

“Pay attention. That which is holy and true to God is like the wind, which blows wherever it wishes. So is God’s Spirit, who fulfills every word the Father speaks.”

Back and forth the two men go at it. At every turn, Jesus drives the discussion exactly where He wants to go, verbally batting Nicodemus back and forth—first this way, then that.

How does He get away with such verbal antics?

Nicodemus already is risking all to have this one conversation with Jesus.

So, Jesus doesn’t waste time. He rudely interrupts, He ruthlessly changes the subject…with one provocative statement after another.

Finally, Jesus presents the most quoted verse in the Bible.

In shocking deference to the itinerant preacher from Galilee, Nicodemus motions for Jesus to stand up first, follows suit, walks to the door, says something only Jesus can hear, and then quietly slips away.

James, the brother of John, shakes his head back and forth, laughs, and says,

“Jesus, now what was that all about?”

To Jesus, the master conversationalist, relationship and meaning triumph over social norms…every time. He interrupts. He puzzles. He changes subject. He provokes. He monologues.

It’s all fair game toward one overriding mission. To shake Nicodemus to the core of his being. To inflict many a sleepless night. To haunt him with statements he never wanted to hear. And, ultimately, to win his heart.

Yes, Jesus doesn’t play “nice.” Like Nicodemus, each person desperate or courageous enough to talk with Jesus ends up facing a terrible decision. Love Him? Hate Him? Accept Him? Deride Him?

Now, as in the days of Matthew, Mark, Luke and John, it’s overridingly important to invite, to cajole, and then to jokingly ridicule someone until they say, “Yes, I’ll read the Jesus story with you.”

When you sit down to do just that, remember Jesus’ example. Ask them to read a few verses aloud. Then ask them what it means. When you get to something Jesus says or does, ask them what they think of what Jesus just said or did.

In particular ask, “Do you think He is trying to be nice?”

Of course not. That’s the whole point. Nice isn’t nice. Nice isn’t loving. It isn’t true. It’s the illegitimate child of Romanticism, which turned the meaning of the word on its head.

“Nice” is a condescending, sarcastic way to say someone is naïve, ignorant, stupid.

So, keep asking, “Do you think He is trying to be nice?”

Keep pounding away at that question until they finally get it.

Once we rescue Jesus from “nice,” He becomes real in their eyes. And then His sometimes seemingly rude, ruthless ways begin to make sense.

Only then can your neighbor make sense of Jesus’ life, His teachings, His miracles, His passion, His crucifixion, His burial, His resurrection, His post-resurrection appearances, His ascension, and His current position at God the Father’s right hand.

Right now, Jesus is praying for you to be anything but a “nice” Christian.

The 2021 Outcomes Conference theme is “Thrive.”

That’s perfect for us as Christian leaders in this moment! Psalm 92:12-13 states,

In the midst of a season that has had its share of challenging circumstances, our prayer for you as leaders is that you would flourish like those palm trees described by the Psalmist. Please join us in Orlando as we

GREAT NEWS – EARLY REGISTRATION HAS BEEN EXTENDED THROUGH MAY 7th