Solomon and Leadership By Paul Swamidass 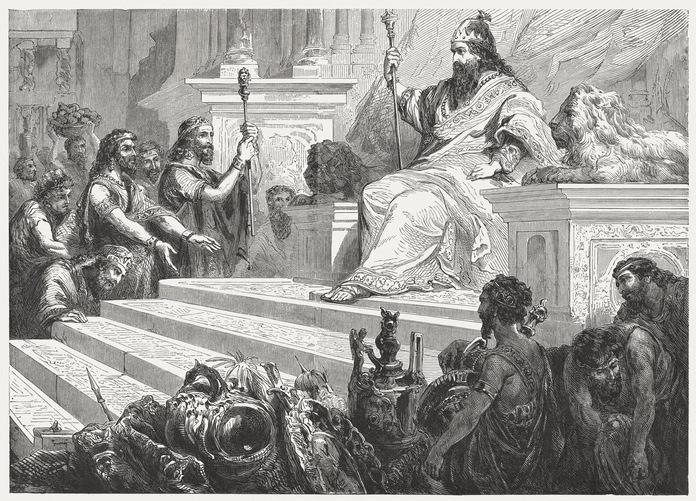 Wise decisions by leaders could be a blessing as evidenced by the decisions of King Solomon. One of  his famous decisions as well as the process he used to arrive at that decision are offered in the Bible as an example of Solomon’s wisdom. That example has stood the test of time as a sound example of wisdom for thousands of years.

The bizarre episode that set the stage for Solomon’s famous, wise decision concerned two quarrelling mothers appearing before King Solomon for a resolution of their dispute; each claimed a single disputed baby as her own child. According to the Bible, this is how the episode reached a just and wise conclusion:

Then the king said, “Bring me a sword.” So they brought a sword for the king. He then gave an order: “Cut the living child in two and give half to one and half to the other.” The woman whose son was alive was deeply moved out of love for her son and said to the king, “Please, my lord, give her the living baby! Don’t kill him!” But the other said, “Neither I nor you shall have him. Cut him in two!” Then the king gave his ruling: “Give the living baby to the first woman. Do not kill him; she is his mother” (1 King 3: 23-27; NIV).

In this episode, as a leader, Solomon was faced with a tough decision. If he made an error, a child would end up with the wrong mother, and the real mother would be deprived of her child for life, consequently, grieve as long as she lived, and hate the king. What can leaders learn from Solomon’s wise decision?

A dozen facets of this episode exemplify Solomon’s wisdom:

Above all, wisdom is, wanting to do the right thing (Item 1). If this is not the driving force in a leader’s decisions, wisdom will depart from the leader. Just as King Solomon faced a difficult decision, Aaron too faced a difficult decision, when some men approached him, in the absence of Moses, asking for a golden calf to worship (Exodus 32: 1-6). If he wanted to do the right thing, Aaron could have refused the request. But it appears, Aaron did not even attempt to do the right thing, when he promptly enabled the making and worshipping of a golden calf at the foot of Mount Sinai, when Moses was away.

Aaron’s unwise decision to enable the worship of a golden calf made God angry, and the consequences were severe: “And the Lord struck the people with a plague because of what they did with the calf Aaron had made” (Exodus 32: 35; NIV). An unwise decision emerged, when Aaron did not attempt to do the right thing (Item 1).

Leaders are learners. They invest in training and experiences that deepen their wisdom and increase their effectiveness. If you want to grow as a leader, then make the investment and enroll int the Outcomes Academy Online.

Enrollment is open now – April 1.  We recommend you check out our newest online course:

The Heart of a Leader

Because we believe that successful leadership begins on the inside, this course is designed to intentionally focus on a leader’s heart motivation, our “why” first. Defining our “why” is not an easy task. It requires soul-searching, an understanding of one’s core life values and a desire for a destination that’s much more than pure profit or personal success. This course will explore critical questions every leader must answer, differences between a spiritually healthy and an unhealthy heart and how understanding and embracing our identity and an accurate self-awareness will make us much more effective influencers!
Faculty: Phyllis Hennecy Hendry – President and CEO, Lead Like Jesus