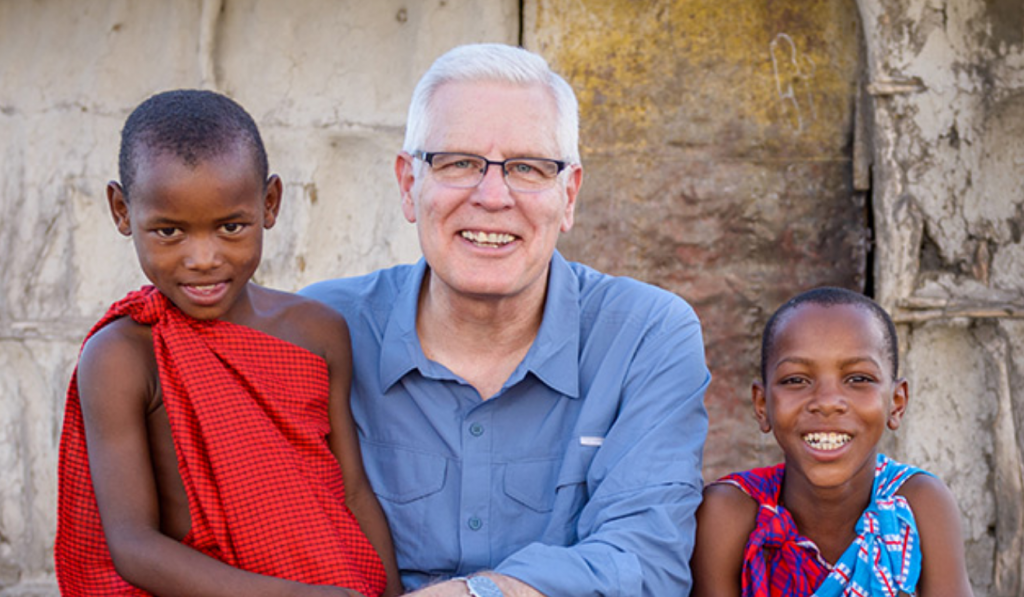 What does it mean to be fully persuaded that God will do all he promises to do? In a moving presentation at The Outcomes Conference 2018, Rich Stearns, shared a story and his testimony of how he became fully persuaded.

It’s been a year since Rich officially transitioned his role as the president of World Vision U.S., to Edgar Sandoval.  His transition was well planned and an example for many.  Rich’s leadership and global impact continues. Today we share with you this powerful message of encouragement. His words are ones that every nonprofit ministry leader needs to hear and embrace.

I was in Kenya last summer and I had the opportunity to meet a 54-year old sponsored child named Jackson.

In 1974, some family somewhere in the world made a decision to sponsor a ten-year old boy. We don’t have the records from back then but if they were typical World Vision sponsors, they were likely a middle-class family with children of their own.

They made a decision to sacrifice some of their money to sponsor Jackson – maybe believing that while they couldn’t change the whole world, they could at least help one little boy by giving him a chance to go to school and by relieving some of his suffering caused by poverty.

And Jackson was indeed poor.  His father had died when he was just 4 leaving behind eleven wives and more than 50 children!  Can you imagine? And so, because of that family, and because of World Vision, Jackson was able to stay in school.

He received new shoes, a school uniform and books.  His school fees were paid. From time to time he also went to World Vision Bible Camps where he heard the gospel. And he got annual health checkups as well.

In 1976 there was a terrible drought and hunger crisis in his community.  But World Vision supplied grain and oil and some beans to keep Jackson and his family from suffering severe malnutrition.

Then in 1977 when the rains returned, World Vision taught them new ways to grow food and produce abundant crops.

The years passed and Jackson was able to finish high school with top grades – with World Vision paying his school fees the whole time.

In the years after high school a Christian missionary in Kenya took Jackson under her wing and used him as a translator since he spoke both English and Swahili. God was at work in the heart of that young man.

In the years ahead, Jackson managed to graduate from St. Paul’s University in Nairobi and then later he studied in the UK and received a master’s degree in Social Development and Sustainable livelihoods from The University of Reading.

In 2016, forty-two years after he was first sponsored, and at the age of 52, Jackson Ole Sapit was named the 6th Archbishop of the Anglican Church of Kenya – as the spiritual leader for 5 million people.

Isn’t it amazing what God can do with the life of just one child?

But back in 1974, no one saw what God intended to do. No one saw the harvest.

When that family made the decision to sponsor that boy in Kenya, I am sure that they were just thinking about helping one child with food, water, basic health checkups and school. They just scattered some seeds. But God was growing an Archbishop.

And what about the World Vision staff back in 1974?  They may have felt overwhelmed by the magnitude of the need. It’s possible that they might have felt like failures.

Maybe they struggled with insufficient funding for their programs.  Maybe the Kenya National Director had to deal with serious personnel problems in the project area. They may have been overwhelmed and discouraged by the magnitude of needs they could never hope to address in that community.

But you see, regardless of how they felt,

Regardless of what they did or failed to do – God was at work through them.

They were involved in changing that little boy’s life, but it didn’t depend on them.

Jesus said, “This is what the kingdom of God is like. A man scatters seed on the ground. Night and day, whether he sleeps or gets up, the seed sprouts and grows, though he does not know how. All by itself the soil produces grain—first the stalk, then the head, then the full kernel in the head. 29 As soon as the grain is ripe, he puts the sickle to it, because the harvest has come.”  ~ Mark 4:26-29

Last summer I had the privilege of meeting Archbishop Ole Sapit in Kenya and I want to read to you something he said to me.

“I thank God that he has put me in a position to give back what I received. I was sponsored.  When you empower children, you have a society for tomorrow.  I am forever grateful to World Vision.  I could not have become the person I am.

I am an example of how someone can rise up to become a beacon of hope.  I am so grateful.

I want the church to be the convener and sustainer of social needs. My hope is to see a church in 50 years that is growing deeper.  A church that practices a faith that connects, so that what we profess is what we do.  I want to see the church in Africa become the next missionary-sending continent.”

I want every one of you to hear and know,  God is using you.  He is using your ministry in ways you can’t imagine. He is even using your blunders, your mistakes and your failures.

God calls you only to be obedient. You are involved with what God is doing but it does not depend on you.

He is working through you and with you to change the world and to usher in His Kingdom.

Remember this when you are feeling discouraged.

Remember this when you feel inadequate.

Remember this when you feel like you have failed.

Like Abraham, you can be fully persuaded that God has power to do what he has promised.

Yet he did not waver through unbelief regarding the promise of God, but was strengthened in his faith and gave glory to God, being fully persuaded that God had power to do what he had promised.  This is why “it was credited to him as righteousness.” – Romans 4:20-22

You may not always see it.

You may not always feel it.

But you need to believe it.

God is doing it.

Rich Stearns is the President Emeritus of World Vision U.S.  He calls Christians to action on the greatest needs of our day. His award-winning, best-selling book, The Hole in Our Gospel, has encouraged hundreds of thousands of readers to open their hearts to those who are hurting in our world. His latest book  is Unfinished: Believing is only the beginning.

Don’t miss what is happening at Christian Leadership Alliance!